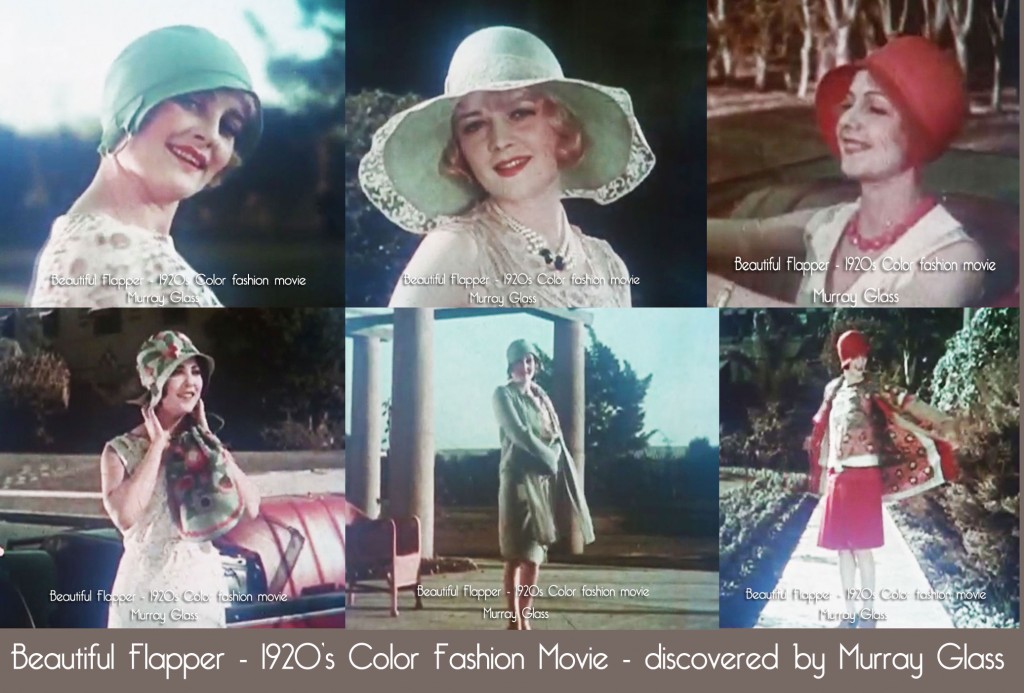 Since Glamourdaze’s inception, we have slowly built a found film archive of vintage fashion on YouTube which you can watch here on our dedicated Fashion Film Archive pages. The Rick Prelinger Archive has been one fabulous resource from which our series of Miss Ratherly Stern Vintage 1940’s make-up tutorials were created.

Beautiful Flapper – Color 1920’s  fashion film is unique for it’s display of women’s fashion in lush technicolor from the golden era of the late 1920’s.

Murray Glass is native New Yorker from the Bronx, a chemist and musician, began his love for spooling old film when his father bought him a ‘toy’ 16mm film projector. Whilst doing his degree, he studied the art of film making under famed film maker Hans Richter and thus inspired, began collecting in earnest. Em Gee Film Rentals was born, and the income earned from renting to film institutions allowed Murray to keep on collecting until there was over 6000 titles in his collection.

Along the way, Glass made it a practice to find, wherever possible, rare 35mm nitrate films which he restored,  then transferred to 16mm negatives, and sent the originals to such archives as Eastman House, MOMA, and the Library of Congress. After a half-century of renting, selling and trading films and videos, he attained the point of retiring last year, but has privately continued to search out, collect and restore old films.
We’re delighted to be able to interview this unique man.

Hi Murray and thank you for taking the time for this interview with Glamourdaze.
To begin at the beginning – regarding ” Beautiful Flapper – 1920s Color fashion movie“.
How did you come upon this unique film – original title – Technicolor fashion 1927, and how did you restore it ?

It was part of a collection of 35mm nitrate films which I purchased from the estate of an individual who operated a small-scale film lab in Hollywood. When he passed away, his mother auctioned off the contents of his lab, which included a fair number of shorts and features, several of these films among them. I had a friend who owned a 35mm projector, and he was kind enough to run them off for me, and such items as I felt were of interest, I took to a lab in town which was able to handle nitrate , and had them reduced to 16mm negatives. From these negatives, I was able to have prints made for my rental library as well as to offer them for sale.

It is so beautiful, and has become very popular, partly because of the beautiful models and styles , but mostly because it’s actually in color!

I may have another reel of similar nature, called TECHNICOLOR FASHION PARADE #2. I am checking to see if I’m correct. If I am, I will let you know.

That’s wonderful – we can’t wait to see that one !
How did you start archiving old film and come to collect so many old nitrates?

It started as a hobby, collecting old films, then became a career!  (See bio above).

Had you an interest in film archiving ?

I never considered myself an “archivist.”… It was (and to a limited extent, still is) a business and livelihood.

What is the process in restoring and transferring them to video?

If the original nitrates are not too far gone (as either a powder or gummy mass) one takes the films to a laboratory (and there are very few any more which are willing to handle nitrate) and has them reduced to 16mm safety film negatives, which can then be used to make safety prints. At one time, when 8mm and super-8mm were popular, the 16mm negatives could be used to further reduce them to 8mm and super-8 prints. Nowadays, the 16mm prints can be transferred to VHS and/or DVD.

The films you found and restored are now available to buy in full resolution through various distributors like Flicker Alley, but you still operate Emgee Films and the originals are still available to rent or purchase from you directly. Are you still looking for old undiscovered films?

If and when the occasion arises.

Finally what would you like your legacy as an archivist to be?

That I had, through my film library, had some influence on film students at colleges and universities, to study, love, and eventually produce films.

That was Murray Glass, film archivist – a self effacing man. If you haven’t seen this unique film, you’re in for a treat.