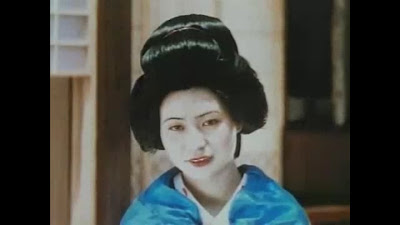 The history of the Geisha makeup

The apprentice geisha are called Maiko, and in the film, an excerpt from James Fitzpatricks famous 1930s travelogues, we see an older geisha being attended to by her Okasans or sisters.The heavy makeup was only applied to Maikos, and when she became a mature geisha, she was not expected to wear as much, as she was now considered beautiful in her maturity.

The art of geisha makeup.

Ignoring the fad of instant geisha makeup videos on youtube, which followed the successful Memoirs of a Geisha film it is interesting to learn what a real Geisha had to endure in order to achieve the look. The application of geisha makeup is a long endurance test, very time consuming. First up is a special oil, melted in the hand and applied to the chest, neck,face and nape.This helps the white foundation to adhere. In the early days, many of the pastes contained lead and must have been poisonous to the young women, but modern geisha do not have this to worry about.

White powder was mixed in water to a paste and brushed on. Once fully applied,and sponged down, the eyes are painted red and black. The red color was more dominant in the Maiko [ student geisha ] and disappears when she has become a full Geisha. Finally the lips are painted with a small brush, the original red was from sallflower. Sugar is dusted over top for a glistening effect. The lip is only partly covered in a manner that reminds me of the 1920’s flapper cupid bow style. Again, the small lip effect was only for younger geisha, and eventually she will paint her full lips.