Below is a unique vintage 1940’s beauty and makeup guide followed by some quotes from the famous Helena Rubinstein, originally published in December of 1922 .Enjoy!
By that stage, she had been a beauty specialist for nearly thirty years and was hugely famous, with salons in London, Paris, and other European cities, as well as new York and Chicago. Born in Poland, she studies medicine in germany, later concentrating on the treatment of the skin.Along with Max Factor, she was and still is one of the leading names in makeup .She sold her business to Lehman Brothers for $7.3 million in 1928 and after the crash, bought back the nearly worthless stock for $1 million and built it up to be the leading name in beauty it is today. While there was a vicious rivalry with Elizabeth Arden, both women shared the value of luxurious packaging, beautiful salons with attractive beauticians, celebrity endorsements and the notion of perceived value. That ethos is alive and well in the beauty industry today. 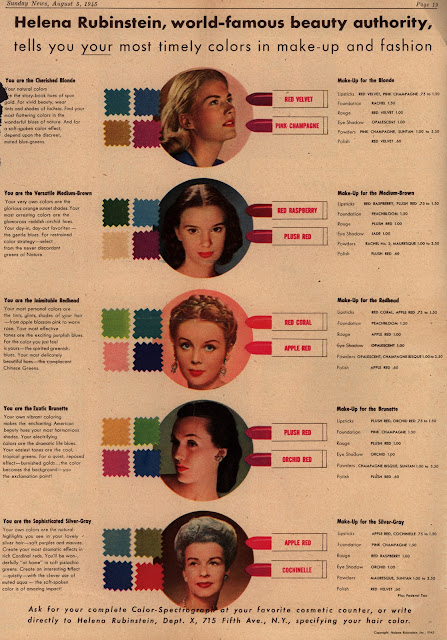 ” If you can show me a woman who doesnt want to look young and beautiful – well, I’m afraid she isn’t in her right mind. Women all want it – and we admit that they do ! That’s where men and women are different. Men hate to grow old – but don’t like to say so. And whilst most of them don’t worry if they aren’t handsome, I assure you that they are not so indifferent on this subject as you would be led to believe.”

” The commonest problem among young women are enlarged pores and blackheads. This i snot
due to lack of cleanliness, and I have heard many girls unkindly criticised.It is caused by oily skin, and frequent use of bland creams make it worse.It is important to pay attention to young skin problems. If you have dry skin, avoid most soaps, as they are alkaline and like a thief in the night will steal what little food your body provides to heal the skin.”

” A good smile is worth a thousand face lifts .The line going from the point of the chin is an infallible index as to the age of a woman.So pay attention to it. In youth it is a lovely curve, then it gets heavier and droops more and more as the face muscles begin to sag. Some women remedy this by remving a small section of skin under the hair above the ears, but this is not necessary if a woman keeps her facial muscles firm and healthy.The most common problem to beset middle aged women apart from contour loss are wrinkles. Persistant treatment with face cream and excersise will keep it at bay, but to lose wrinkles altogether is unnatural .Middle aged beauty, wrinkles included, is something a woman should be the proud bear of ”

” The English have thin skin, the french and Italian women have thicker skin, and American skin, being a blend
of many nationalities is the thickest. Young american women have the loveliest complexions in the world in my opinion”

” Unhappiness in life and in marriage is often the very thing that makes a woman struggle to improve her appearance.”

” When using creams, if you use a nourishing cream for a time, then stop, your skin will become dry
again, but not worse. However, if you use a dry or matting cream for oily skin, then stop taking it, your skin
will get worse.Some women use belladonna to make their eyes bright. When they stop using it, their eyes are
not improved but have suffered from the practice. Women used to take arsenic to give them a becoming pallor. Some still do, the effect is truly awful. Do not use arsenic on your face !”

” English women I believe, make a greater effort to preserve their good looks than any other nationality.
In London I have several hundred clients, who are from seventy to seventy eight years of age.Regularly
three generations, grandmother, mother and daughter all visit me together”

For some beautiful vintage makeup and hairstyle  inspiration .