The  most glamorous of decades was probably the 1950’s and this beautiful film. It illustrates the creme de la creme of fashion designers. Christian Dior, Cristóbal Balenciaga, Pierre Balmain, Jaques Fath, and of course Coco Chanel.

Probably more than anyone else, Christian Dior redefined the look of women after the war years, with his bell suit and tiny waists. Grace Kelly was a great fan of this style. A master at shapes and silhouettes, he died in before the decade was out in 1957. 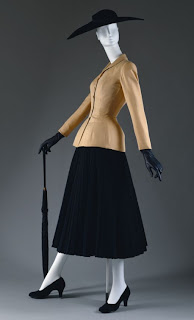 The iconic photo above is now mistaken for the original 1947 Dior Bar Suit. It was in fact taken in 1957, to commemorate the 10th anniversary of The New Look.

A big fan of opulent glamour, the Spanish designer Balenciaga nevertheless went the opposite direction to Dior with sleeker silhouettes and less emphasis on the waist. His tunic dress paved the way for Chanel’s chemise.

Mentioned so eloquently in the 1960’s folks song by Peter Sarstedt “Where do you go to my lovely”, Pierre Balmain was incredibly well known. His pure french style of elegance and grace was the envy of all designers.He popularized the Stole, which women took to draping over their evening dresses.

Not a big fan of Dior’s flowery dresses, Coco Chanel remained at a low profile for some years after the war, concentrating on Couture fashion. Coco Chanel’s behavior during the Nazi occupation of Paris not withstanding, it goes without saying that Chanel blew her competition away with her famous come back in 1954. Her Boxy Suit defined the later sleeker look of the 1960’s and marked an end to her high fashion days. As ever she was ahead of her time. Her easy to adjust Chemise dress was a particular favorite with ordinary women, cherishing comfort, but also showing off a lushness of femininity. She may have hung out with the odd Nazi but she was a genius.

A Chemise Dress by Coco Chanel.