Would you like to meet a real Mad Man ?
Meet Eric Steinbicker , now a well known travel novelist, he started out in his youth as the studio manager to the famous fashion photographer Richard Avedon with offices on the famous Madison Avenue.
He is writing a book called Assisting Avalon. In his own words he tells us what it was like to hang out with glamourous models and film stars. 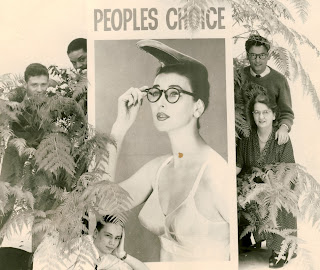 “Entering the door, I was introduced to the staff. What a group they made! Here’s some of them, and that’s me on the floor. This was the set for one of the first jobs after I started, a part of the “I Dreamt I Was A (Whatever) In My Maidenform Bra” advertising campaign.”

“At first, of course, I did not earn much, but my meager pay was sometimes supplemented by posing in advertising photos (Revlon ad, above). Besides Revlon’s Cherries in the Snow ad in which a luscious model fed me cherries.”

“Another of my enjoyable duties (we won’t mention mopping the floor) was to support lovely models as they got “put together” by the fashion stylists. Like the one in the photo on the left. She had a warm back.”

“That’s me playing matador with a fake bull. This was part of a fashion ad with my head between the horns, ogling Dovima the model. The final result is below. The fashions are very 1953.”

“The photo below shows a leg model preparing for a hosiery shot under the skylight at 640 Madison Ave., circa 1953. Avedon is on the right.”