Before you go shopping for some cool Vintage swimwear or Retro Swimwear, why not sit back
and learn a bit about what you’re wearing! 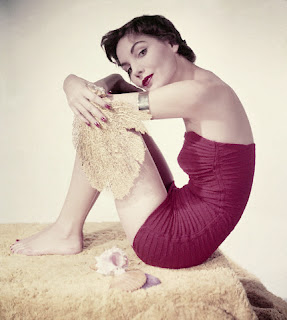 Perhaps more than any other garment, the swimsuit

has changed beyond all recognition in the last century.
One of the most appealing aspects of early 20th century women’s swimwear fashion,
was the gradual uncovering of her body again after the stuffy and repressed days of the Victorian era.
In those days, women were expected to wear even more clothing when they went to the beach!

The Edwardian years saw a gradual change in attitudes, thanks in part
to the French women in post first world war Deauville and Biarritz , and to the growing influence of the USA in women’s liberation.
Liberation of her knees that is  –  the pursuit of equal rights is still on the agenda in 2010 .

Knitted swimwear was the first big change. very naughty at the time by all counts, those early
images of daring women are priceless.Caps were usually made of uncomfortable rubberized
fabric, which discouraged many women from going for anything more than a paddle.

Looking at the timeline of Vintage Swimwear design, some major companies come to mind – in particular the famous Jantzen Swimsuit

The popular one piece swimwear design for the 1920’s resembled the minidress of the 1960’s, and even employed the use of tights!
Bathing caps

were now made from stretch latex rubber , and were beginning to become a fashion accessory.

Photo – Jantzen Archive Blog
A few designers stand out in this decade.

She adapted the more traditional tank top Mailott or One piece Swimsuit
and designed the first backless swimsuit to allow a woman to get a more even
tan to show off in her evening dress.

As the 1930’s progressed, womens swimsuits had grown a lot shorter.

, the creator of the American Look,
took a pair of scissors to this and created the first two piece, which was
the forerunner of the Bikini.

Skirted suits and bathing caps were all the rage in the 1940’s .

The Invention of the Bikini

Louis Réard unveiled his Bikini in 1946, though two piece swimwear had been around
for a good decade by now. He could not find anyone who was willing to wear this stringy
skimpy excuse for a swimsuit and subsequently hired model Micheline Bernardini – pictured below
to pose.

It caused a sensation, and still finds its way into the average womans swimming attire to this day.
For the record Reard claimed that you do not have a ‘ genuine’ bikini unless you can pull it
through your wedding ring!

Truly the decade of Swimwear glamour !

and Diana Dors turning up in Bikinis.

Most women however stuck with the one piece swimwear.
The forerunner of today’s Miraclesuit

Swimwear was the Corset swimsuit
which became popular for women not blessed with a perfectly toned body.
Faced with a drop in sales, traditional corsetry manufacturers branched out.
Soon, tummy panels and boning with bra cups began to creep into designs.
Apron designs were popular and skirted two piece outfits also.
For a gorgeous range of vintage style swimwear do check out What Katie Did.

Before you go shopping, here’s a few pointers for

Big Tummy – The Miracle-suit is ideal, either way look for swimwear with tummy support.

If you don’t suffer from these ‘ normal’ body shapes, then – lucky you!

We’ll leave off with a charming fashion film from the late 1940’s featuring some of the
latest 1940’s swimwear design.
Time to throw off the clothes and expose that pale skin girls.