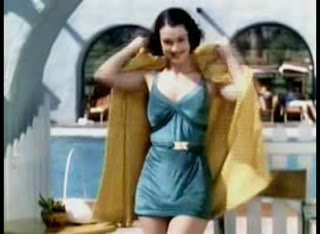 A charming and slightly far fetched little movie short of a glamourous Hollywood party at the famous Ambassador Hotel..
It features some of the biggest stars of the day, wearing the latest fashions.
Some lovely examples of 1930’s womens hairstyles
In the 1930’s the world was gripped by the Great Depression and very often, as depicted in Woody Allens Purple Rose of Cairo, the only source of escapism was going to the Movies.
The stunning early 1930’s fashion

went hand in hand with the Glamour of Hollywood.
Old reels like these look dated now, but they offered hope to millions of people.
Movie goers saw an alternate reality to the grim world they had just come in from.
How important do you think escapism is during times of recession?