A little digging into the history of that popular makeup accessory.

While lip rouging has been around for centuries, like the Japanese Komachi beni lip makeup. Lip makeup entered mass production after becoming widely popular when the Lipstick was invented (purportedly) by Maurice Levy in 1915 a push up tube within a container essentially similar to the shape used today.
“Natural” lip-gloss was also invented, which used bromo acid to create a red effect as it reacted with the wearer’s skin.Yikes !!
In the 1920s, Shaping the mouth became an international preoccupation among women.Metal lip tracers, made in various sizes to satisfy the wishes of the wearer, were developed to ensure flawless lipstick application. Helena Rubinstein created Cupid’s Bow a product that billed itself as a “self-shaping lipstick that forms a perfect cupid’s bow as you apply it.”
The development of the mirrored lipstick container in the 1920’s also points to the importance of shaping the lips through the application of lipstick.

Images and Adverts of Lipstick from 1920’s 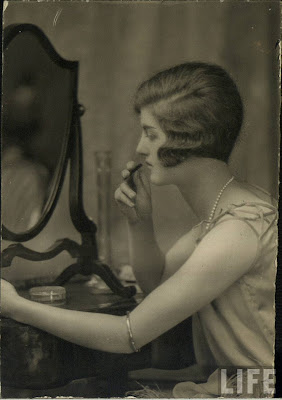 Following the success of the Memoirs of a Geisha film, it’s easy to see how much the Japanese woman influenced western looks in the 20th century !!
Trends in lip colour and lip shape developed through the 1920’s and the popularity of lip cosmetics saw the introduction of other products such as lip gloss, lip liner, and lip balm [ a bomb ???] – created by the genius Max Factor for Hollywood actresses in 1930.

Throughout the 1930’s and on into the war years of the 1940’s lipstick gained popularity as a result of its use in the movie industry, and it became commonplace for women to apply makeup, or “put their face on.”
Lippy [ as it is known in Britain and Ireland ] hasn’t looked back since.

Lipstick Adverts from the 1940’s

17 thoughts on “Lipstick Glamour – The History of Lip Makeup”